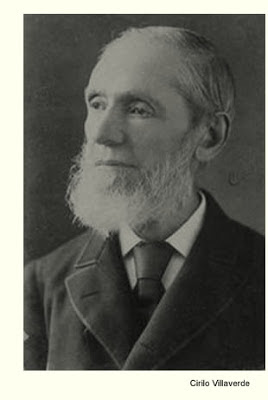 In almost all the brief biographical summaries of the most famous Cuban novelist of the XIX Century, Cirilo Villaverde, there is a short line that seems somewhat mysterious. It says: “In 1864, he founded with the collaboration of his wife, a school in Weehawken”. But the mystery comes neither from the act of founding a school, nor from the strange name of the place where it was founded. The mystery is that such a fact appears in the middle of nothing, without antecedents or consequences. The mystery deepens in my case because it was in Weehawken, a New Jersey town located on top of a cliff, across the Hudson River in front of the island of Manhattan, where I spent my first weeks in the United States.

I lived in those days in a house located a few dozen meters from the exact place (if one can be sure of it) in which Alexander Hamilton died in a duel with the then Vicepresident  Aaron Burr. These days, Hamilton has become famous again thanks to a popular Broadway musical, but in Weehawken there is no sign indicating that the novelist who inspired the best known of the Cuban “zarzuelas”, had founded a school there.

The lack of evidence was indeed mysterious. All my efforts to find some trace of it in the municipal archives of Weehawken or in its library had resulted in a perfect nothing. And yet, upon reviewing the correspondence of the wife of the writer, the famous patriot Emilia Casanova, I found a few lines that gave me back – together with the certainty that it was not a mirage – the impulse to continue investigating the traces that such a school could have left. In any case, Emilia Casanova’s lines were hardly more explicit than the biographical notes about her husband. She wrote to a friend on August 17, 1870: “I distinctly remember the night in which he came to visit us, in the company of his brother Juan Francisco, on the other side of the Hudson, in a school that Villaverde had in Weehauken (sic) around the years 1865 and 66”.
Searching in a monstrous database that includes newspapers from the entire American continent, finally unraveled the mystery. Some ads attested to the existence of the school. The oldest one, published by the New York Herald on February 12th, 1865 announced a Polytechnic Institute at Weehawken Heights, New Jersey as “the best school to learn languages”. “The new term commences on the first Monday in February” it says although that year the first Monday was on February 6th, six days before the ad was published.
In another ad, from the Havana newspaper “El Siglo”, there is a notice of an “English-Spanish Polytechnic School” under the direction of C.P. Villaverde with the “cooperation of American and foreign professors”. It adds that this school is “mounted on the plans of the best schools in Europe, and it offers a scientific and practical instruction that meets the needs of our time”. 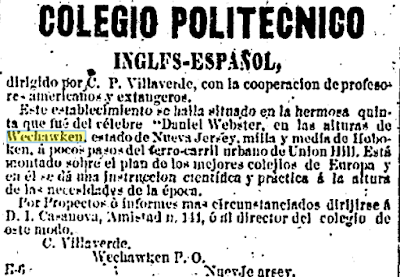 The New York Daily Tribune published on February 6th, 1866 another ad announcing, again, that the “new term commences on the first Monday in February”. 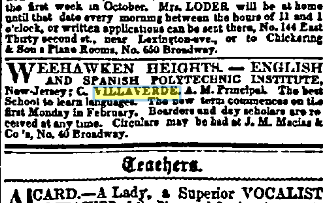 It probably did not work very well or receive enough students, because just two months later, the “New York Herald” publishes on the 10th of April, 1866 two ads offering accommodations to a couple as well as to a few gentlemen.

No exact address was given. It must be kept in mind that Weehawken was only a few years old, having been founded on March 15, 1859, and hardly had any buildings in the middle of nowhere.
The only concrete reference to its location is that “it is located in the beautiful estate that belonged to the celebrated Daniel Webster, on the heights of the Weehawken”. Although in none of the consulted biographies of the representative, senator and Secretary of State of three different presidents it is mentioned that he either lived or had properties in Weehawken, several histories of the County of Hudson allude, in passing, to this fact. In one of them, when referring to the entrepreneur John Hillrich Bonn, German émigré and founder of the Hudson County rail system it is said that he and his wife, after moving for a while to neighboring Hoboken, “they returned to Weehawken in 1867 and made that city their permanent home, settling on the spot formerly owned by Daniel Webster, the statesman”.

In another history of Weehawken it is further stated that Bonn was “one of the pioneers of North Hudson, who settled in Weehawken in 1857, had a large estate in the heights section (2nd Ward) and lived in a large house at what is now known as #530-Gregory Ave. There is a story told that one time Daniel Webster owned”.

Once the exact location of the school is established, there still would be a lot to find out: exact dates of foundation and closure, names of “American and foreign” teachers who taught there, the size of the enrollment, the subjects that were taught. Based on the ads found, it can be deduced that it was a language school, focused on a fundamentally Cuban student body, to prepare them to enter the North American higher education, an increasingly frequent destination among young Cubans in those days. Between the decades of 1860 and 1880, up to a quarter of the students at the Rose Hill Campus of St. John’s College (Fordham University) had Spanish last names. The majority came from Cuba.

However, the school did not seem to be able to succeed: the year after its opening it was trying to complement its income with the rental of rooms, and it would close its doors soon after that. It is, however, relevant for Hudson County -- the sixth most densely populated county in the country – with a visible Cuban Presence (28,900 people of Cuban origin in 2013) and 42% of the population of Latino descent, that it had in such an early date this project of bilingual education (possibly the first in the entire state), precursor of other private schools founded by Cubans in the XIX Century.

The current educational system of Hudson County, New Jersey, with a large majority of Hispanic enrollment, may take this school as a historical background. 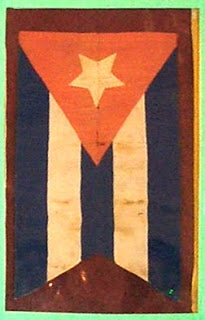